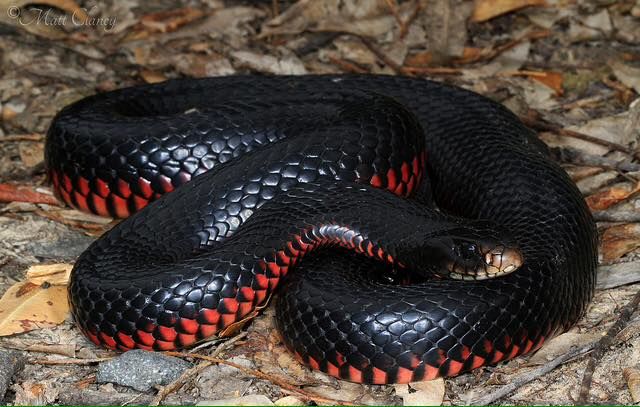 A red-bellied black snake was stretched along the pipe at the back of the laundry tubs, behind the taps. I could see its glossy colours.

I’d been washing up while little Matt played outside the back door. Hearing him bumping something down the three steps that led to the yard and the laundry shed of the old house, I dried my hands and went to see what he was up to.

Matt had dragged a chair over to the concrete laundry tubs and climbed up on it, and he was reaching out, laughing, to the snake.

We were living in the school residence at Rosevale, south-west of Ipswich. Local farmers had warned us that the Rosevale valley was notorious for snakes – both brown and red-bellied black.

Trying not to startle either Matt or the snake, I called out, softly, “Come here, Matt. I’ve got a bikkie for you.”

He turned and climbed down. I grabbed him and ran back up the stairs and watched the snake slither away out of sight into the long grass behind the shed.

Another day Matt was playing in the yard with the cats. Suddenly they stood frozen, ears forward, staring at a patch of long grass, and the two deadly brown snakes sunning themselves there. Con ran to get the hoe.

Snakes are protected by law, and snake catchers will come to your house and take the snake away for release into the bush; but there are many who still consider that the only good snake is a dead snake, and delight in going into battle with sticks, hoes and mattocks or whatever is handy.

As children, my brothers and I entertained ourselves by leaving a rubber snake on the back landing where our father would be bound to find it.

He did. He grabbed a big stick and killed it.

Rubber snakes bounce in a most lifelike manner when hit with a stick. Dad heroically beat that rubber snake to death, and carefully lifted it on the stick to examine it. He said, “It’s a young brown. Dangerous things, those.” That was before he noticed us laughing.

He didn’t think it was funny.

I’ve played that trick on Con. He didn’t think it was funny either.

Most encounters with snakes happen in the bush. Walking down the zigzag track in the rainforest of the Palmerston, west of Innisfail, I met a large brown snake crossing the track. I met the same snake again on the next leg of the path down the hill. You don’t know how high you can jump until you almost put your foot on a snake.

All Australians have snake stories. They are a favourite topic of conversation, and we particularly love to tell them to foreigners. The English are best, and Americans. They respond with such horror.

An American visiting Brisbane asked a local, “Why are so many Brisbane house on stilts?”

“It’s because of the snakes. They can just slither straight under the house instead of coming inside.”

To white farmers and squatters of the nineteenth century, often living in primitive conditions in what was to them hostile bush, snakes were a deadly enemy. Henry Lawson wrote about it in his spare, atmospheric story “The Drover’s Wife”. Living in isolated bushland, alone with her young children in a slab hut, protected only by her kangaroo-dog Alligator, a woman sits up all night with the dog, her children bedded down on the rough kitchen table, waiting for a snake to re-emerge through cracks in the wall.

Alligator and the drover’s wife kill the snake between them, after a fierce struggle; and she lifts it on the point of her stick and throws it on the fire.

We have a love-hate relationship with snakes. They eat chooks, they kill dogs, and sometimes they kill people; but they’re part of our environment, a feature of legends and stories, from ancient Aboriginal culture to the Bible and modern literature and painting.

Rainbow serpent legends exist all over the country, and snakes are a common theme in Aboriginal art.

Some say the rainbow serpent is a carpet snake: the “Kabul” that gives its name to Caboolture.

A carpet snake once ate a litter of kittens under our house at Yarrabah, then coiled up on the front door mat to sleep off the feed. There are carpet snakes living in my Brisbane back yard, too. I know when there’s one about by the screeching of noisy miner birds, harassing a snake on a tree branch or curled up behind a staghorn fern. They’re beautiful creatures, and we like to have them around.

It’s best not to walk out on our verandah at night without shoes, though. Carpet snakes like to slither across the boards and into the wattle tree. Sometimes we see a long, patterned snakeskin hanging across its branches.

No wonder birds don’t visit the bird bath I hung there.

Not even a kookaburra can win against a carpet snake.