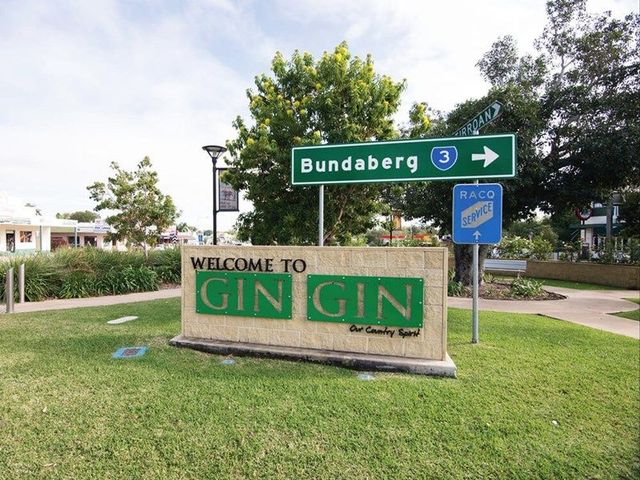 A few kilometres south of Gin Gin, as dusk approached, we were travelling at one hundred kilometres an hour when a wheel came off the car and bounced off through the bush beside us. I watched it go.

Sparks flew up from the road as the axle scraped a track through the bitumen.

It was 1976, and we were driving from Townsville to Brisbane for a family wedding. Before starting out, we’d had our blue HR Holden serviced, including rotation of the tyres. On the rear passenger side, the mechanic had failed to re-tighten the wheel nuts.

Pulled over on to the verge, we considered what to do. It would be dark soon, and we had our young kids with us. We needed to get a message to the RACQ agent back in Gin Gin.

Around this time, a number of travellers had been murdered when pulled over on the Bruce Highway, not far north of here. People were nervous about stopping for strangers; but luckily a family in a car following us saw what happened and stopped to help. Generously, they interrupted their journey to turn around and go back to town.

It was an anxious wait in those days before mobile phones, when stranded motorists relied on passing strangers to contact the RACQ; and a great relief when assistance arrived. Less than an hour after the wheel had come off, the tow truck came to take us and the car to Gin Gin.

Roadside assistance: it’s good to have that backup on road trips. I’ve heard only one bad story connected with roadside assistance, and it came from an unpleasant man met by chance in South Australia.

It was a glorious, starry night at Rawnsley Park in the Flinders Ranges, and there was a fire pit outside the accommodation units. I knocked on doors and invited others to join us for a glass of wine round the fire. We were looking forward to a pleasant evening.

But one man was obnoxious.

Then he told us of a great trick he’d played on a policeman he’d come across, broken down beside an isolated country road.

“I hated this cop – he’d pulled me up a couple of times for speeding – but I stopped and asked him if he was okay.

“‘Yeah, I’m right,’ he said. ‘I waved down another bloke and asked him to call in at the RAA in town and get them to send someone out. Thanks anyway.’

“I fixed him, though,” said our obnoxious companion. “I called in at the RAA in town and cancelled the call-out. Said the problem was fixed. That cop is probably still out there waiting!”

He got a laugh out of telling the story, but we gave up on the evening. A good campfire ruined.

Back in 1976, after losing the wheel, we spent two nights at the Gin Gin Motel, waiting for repairs

It wasn’t the first un-planned stopover we’d had. In 1970, we took our first long car trip as a family. Living at Rosevale, southwest of Ipswich, we were travelling to Innisfail for Christmas with our eight months old baby, Matt.

All went well as we drove north in the blue Holden, until we stopped for fuel in Rockhampton. There was none. The tanker drivers were on strike, we were told.

“We’ve got enough fuel to get through to Marlborough,” Con said. “They’ll probably have some there. Let’s give it a try.”

An hour or so later we pulled in to the Marlborough service station.

“We’ve got no fuel, mate,” said the man behind the desk. “The tanker’s coming through in the morning. You’ll have to wait until then.”

In the nearby motel, all the rooms had been taken by other stranded travellers. Our only choice was the Marlborough Hotel, in the tiny township a kilometre or so to the east, beside the railway line.

We checked into the last available room in the basic, single-storey pub, grateful to get it: Con and I and baby Matt in a room with two sagging single beds and a washbasin in the corner.

That Saturday night in Marlborough, ringers and stockmen from the surrounding countryside came into town for a night out at the pub, the only drinking place for one hundred kilometres. We were welcomed in the bar, and little Matt was passed round and admired. Later, I washed his baby bottles in hard water in the dingy, concrete-floored communal bathroom out the back.

I shared my narrow bed with the baby. The sound of boots tramping along the verandah outside was occasionally drowned out by the rumble of a freight train on the track just across the road. Next morning, we made our way back to the highway service station, where mercifully the petrol tanker had arrived.

The Marlborough Hotel still offers accommodation. According to its web page, fifty dollars a double will buy you a bed and “continental” breakfast; or you can camp out the back and use that dire bathroom for five dollars. I hope they’ve softened the water.

Flat tyres, lost wheels, petrol strikes, bogs, floods, blown-up engines and broken fan belts: we’ve experienced them all over the years. With improved technology and better roads, breakdowns don’t happen so often now, but with gaps in phone coverage, even on the highways, there are still times when travellers need help from passing strangers. It’s wonderful how generously that help is given.

Repairs done and a new wheel on the Holden, we set off again from Gin Gin, heading south. I could picture the wheel bouncing away through the bush, and when we came to those scrapes in the bitumen we pulled over and went searching for it. And there it was, in the long, dry grass among the gum trees, waiting for us.

I can still see that bouncing wheel; but of all of this, our two kids remember only that while we were waiting in Gin Gin, little Lizzie walked in front of a heavy wooden swing in the playground. It hit her under the chin and knocked her over, and even today she can tell you that story, and show you the scar.

4 thoughts on “Losing a Wheel”