We were on our way to Rockhampton in the old red Falcon. The Bruce Highway to Rocky was at last almost free of road works, after years of major upgrades. Constant speed limits still applied: one hundred kilometres per hour signs, then eighty, sixty, forty, and back up again. Construction had finished, but road marking was still going on, and so the speed zones were still in place.

North of Gympie, we failed to notice a forty kph sign. A police car appeared out of nowhere, and a handsome young policeman with a Welsh accent wrote Con a ticket for three points and two hundred and twenty dollars.

Considering that we are not tradies in a hurry, over-confident young drivers or hoons, Con and I have forfeited a lot of points over the years. We’ve both come close to losing our licenses at times, and it’s usually for going over the limit in a speed zone such as this.

We drove on, cautiously, and stopped for the night at Childers.

Childers has a quaint streetscape, with heritage buildings, trees, sculpture and mosaics, charming even with the Bruce Highway running through it. The traffic keeps the Childers pedestrians nimble, those pensioners, grey nomads, hippies and backpackers. We checked into a motel and dined at The Federal Hotel, a pretty, heritage listed building.

Next morning, Con did the Walk of Shame, down to the Police Station to pay his speeding fine. He likes to get these things over with.

“Can you remember your first speeding fine?” I asked him, when we were back on the highway.

The Golden Holden was the same colour as the foil in Con’s cigarette packets. He was a great smoker in those days.

“It was our first trip south in the new car – going to a wedding, do you remember?”

Over the years, Con and I have travelled Queensland, north to south or south to north, for four weddings and four funerals. We could make a movie of it.

“Next ticket – 1998. First long trip in the Falcon, and I got caught twice. The first was at Kuttabul, north of Mackay – a speed camera. The other one was south of Rocky, on the way home. A cop in a patrol car waved his finger to me to stop. Three points each time!” 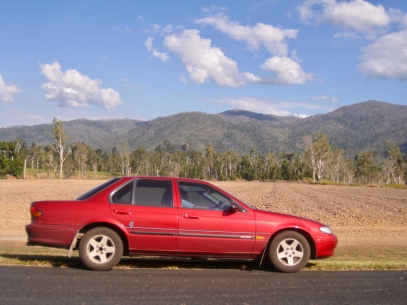 “I remember. You were still down those six points when we started the round-Australia trip.”

“Yes. And just after we started, a few kilometres the other side of Cunningham’s Gap, I overtook a semi-trailer. I was going one hundred and twenty k’s when I came back over to the left. There was a white police van parked beside the road, and I knew I was done again.”

That would have meant that Con was nine points down before we’d even left the state. One more ticket, and I would have had to drive the whole way around Australia, so I said I was driving at the time, and took the points myself.

Back then Con did most of the long-distance driving because he has always been better at overtaking than me. I remember with pleasure, though, that I drove the straight stretch on the Nullarbor Plain, one hundred and forty-six kilometres without a curve; the longest straight stretch of sealed road in the country.

“Do you think I should overtake this truck?” I’d asked, about halfway along.

Now, on the way to Rockhampton, he continued to list his speeding tickets.

“It’s 2001, I’m going to Gympie for Uncle Frank’s funeral, and I get pinged for doing eighty-two in the eighty zone. I lost a point, and they sent me a form suggesting a driving counseling course. Ha!”