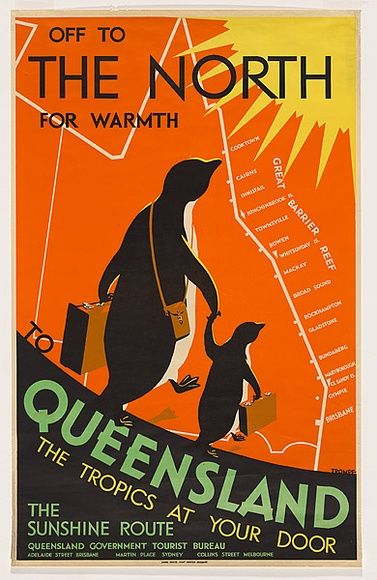 We’re travelling north from Bowen on the Bruce Highway. The road follows the railway line.

Road trips provide lots of opportunities for reminiscing, and as I drive, we talk about our train trips of the past.

At school I learned off by heart the towns along the “Sunshine Route”, the railway trip from Brisbane to Cairns: Brisbane, Nambour, Gympie, Maryborough, Bundaberg, and onwards. One thousand, seven hundred kilometres: promoted by Queensland’s developing tourism industry as a great, romantic train journey, from the city in the south, through pineapple fields, cattle country and sleepy towns to the green mountains and purple-tipped cane fields of the far north.

This railway line was not built just for tourists. Until the main north-south railway line was finally completed in 1924 with the opening of the Daradgee Bridge north of Innisfail, Cairns was isolated from the rest of the country except by sea. There was no highway. In a state dependent on farming and mining, the railway was vital.

Like everyone over a certain age who grew up in North Queensland, Con has lots of stories about trains.

“When I was eleven, the old man took me to Brisbane by Sunlander. It was new, diesel, and air-conditioned – the wonder of the ages. We had a second-class sleeper and ate in the dining car. I’d always been second-class sitting on the trains before. None of our family ever went first-class. We’d have gone third class if there was one.”

My first long train trip was a Y.A.L. trip from Brisbane to Cairns. The Young Australia League was founded early last century with the aim of promoting national pride in young people and educating them through travel. I tell Con about it as we drive.

“They took us to Kuranda and Ellis Beach. That was the first time I’d seen coconut palms. We went to Green Island, and I bought a piece of coloured coral set in plaster with ‘Cairns’ written on it.”

I slept on a top bunk, and I recall the clicketty-clack of the wheels at night, and the sight of embankment gravel rushing past below the toilet bowl.

“I had a bit of coral like that, too!” says Con. “I was proud of it, and I gave it to Mum. She put it in the china cabinet with the good cups. I don’t know where it ended up.”

He continues as we pass the Abbot Point turnoff.

“My next trip was by myself. I was seventeen, and I went to Brisbane, to Teachers’ College. I had a rail voucher for a first-class sleeping berth. I was hoping I’d meet a beautiful girl on the train, and we’d fall madly in love and make good use of the berth. No luck with that.”

“It wasn’t all wasted, though. When the train pulled in at Tully I went to the railway refreshment rooms and bought my first packet of cigarettes. By the time we got to Townsville I’d made myself sick, but I persevered. I smoked for the next forty years.”

We stop at the roadhouse at Guthalungra for fuel. Back on the road, we pass through Gumlu, still following the train line.

“Each Teachers’ College holiday the trains were bursting with students. Drinking was banned, but that was just a challenge to us. I looked older than my age, twenty-one at least (the legal drinking age), so I’d get off at stations with a blanket wrapped around me and head for the refreshment rooms bar. The hard part was climbing back on to the train without the bottles clinking under the blanket.”

“A thousand teenage students from North Queensland travelled on those trains, drinking, laughing, cuddling, playing cards and singing. You get through a lot of songs on a forty-hour train trip.”

Last century, nearly every country town had trainlines, carrying cattle and sheep, bananas and oranges and mail, and the products of the mines. Most closed as roads improved and road transport took over, but you can sometimes see the line of the old tracks on Google Earth: Rockhampton to Yeppoon, Monto to Gayndah, Dalby to Bell, Cloncurry to Dajarra.

They look like ghost tracks now, or like the outlines of ancient Roman forts as seen from the air in the green English landscape.

Most of the trains live on only in memory, but their comforts and discomforts are celebrated in song –:

On the Queensland railway lines,

There are stations where one dines,

Males and females, high and dry

Pies and coffees, baths and showers,

Are supplied at Charters Towers;

At Mackay the rule prevails

Of restricting showers to males.

On the way to Dirranbandi,

Passengers have died of hunger,

Let us toast before we part,

Those who travel stout at heart,

Drunk or sober rain or shine,

On the Queensland railway line.