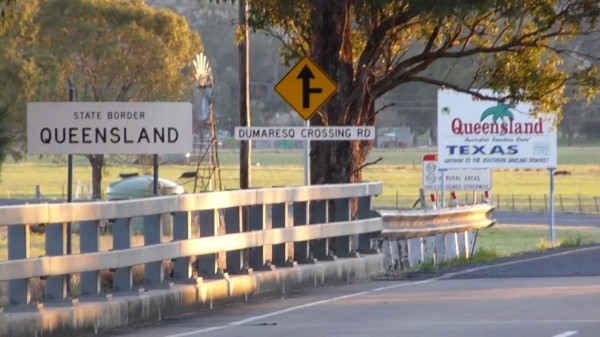 Out the back of the Mauro homestead was a pit toilet, a scary place for a townie child like me. What if I fell down the hole?

Mum liked to tell the story of when she was little, out at Barcaldine, and a goat fell down the pit toilet. They sent the jackeroo down to get it out.

When my mother Pat was a child, her father Fred was manager of a sheep station not far from Barcaldine. Even after leaving the land, many of Fred’s descendants maintained all their lives a sense of belonging to the bush – even his second daughter, Betty, who married an American after the war and spent most of her life in Seattle.

Betty liked living near the Pacific Ocean, knowing that on the other side of the water were the beaches and plains of home.

Between the wars Fred took up ownership of a sheep station, through a land ballot I believe; a place called Dunwold, outside Dirranbandi. While still a teenager his eldest son, my uncle Jim, went out there to manage the property. The family next bought a property near Texas, on the New South Wales border, and Fred’s second son, Don, took it over.

When I was young, perhaps four or five, my family went to visit Dunwold, flying to Saint George in a DC3, where Uncle Jim picked us up from the airstrip. Both my uncles considered that we coastal kids needed a bit of toughening up, and at Dunwold I was taken out to watch a sheep being slaughtered. To my great relief, something intervened – perhaps my mother – and I was spared the sight of the killing.

We visited Uncle Don more often. His property, Mauro, was closer to our home in Nambour – only a five- or six-hour drive. Mauro was just over the Dumaresq River, which here forms the border between Queensland and New South Wales: the wriggly part. Mauro is in New South Wales, but Texas, in Queensland, is its nearest town.

The Dumaresq (pronounced Dumaresk or Dumerrik, depending on who is saying it) rises in the Great Dividing Range near Stanthorpe and Tenterfield and flows west into the Macintyre River, which in turn flows past Goondiwindi, still forming part of the border. These are known as the Border Rivers.

Border towns borrow a little from each state. One wintery morning in Goondiwindi, which is in Queensland and therefore sells the Courier-Mail in all the shops, I visited the local Salvation Army Thrift Shop. The ladies in charge were sitting around a table doing the Sydney Morning Herald crosswords. “We get the Herald in specially”, they said. “It has better crosswords that the Courier-Mail.”

The Macintyre River continues further west, joining the Barwon River. The Barwon flows into the Darling River and on into the Murray.

These western rivers have dangerous floods, although the countryside has been drought-stricken for years now. I remember as a child sitting in our family’s Vanguard stuck in the middle of flooded Camp Creek, near Mauro, with my feet up on the seat and floodwater flowing through the car. A tractor towed us out.

All of Fred’s descendants who lived at or visited Mauro will have strong memories of the place. I remember it as if I’m looking at a photo album. Here was the pepperina tree beside the house. When I smell the leaves of a pepper tree, it takes me straight back there. Outside of the house yard, the ground was thick with prickles – bindy eyes, as we called them. We coastal kids had never before experienced those savage, dry-country prickles.

I think it was actually khaki weed, a broad-leaved prickly plant. Bindii is the nasty prickle that grows in my Brisbane lawn – little clusters of carrot-like leaves with prickles in the middle that break off and stick into the skin and make the children go carefully on tiptoes down the concrete car tracks.

The worst prickle I’ve come across is the aptly named goat’s head, found in the Gulf Country around Burketown. Standing on the thorns of a goat’s head is like standing on a couple of thumb tacks.

At Mauro there was a shearing shed, a hundred metres or so from the homestead, with chutes where shearers pushed skinny-looking shorn sheep down into the pens below, slotted tables where roustabouts threw the fleeces, and the wool press that did the baling. There was a strong smell of sheep droppings, fallen between the floorboards and piled up under the shed. We didn’t often visit the shed during shearing, because, Uncle Don said, the men didn’t want to have to curb their language.

Behind the house yard at Mauro was the dam. We went swimming there once. The soft mud at the bottom oozed between our toes.

There was an ant bed tennis court beside the house, surfaced with crushed and rolled termite mounds, and peacocks screamed at dusk on the fences.

Besides sheep Mauro produced fodder crops, and Italian share farmers grew tobacco. We sometimes visited them, peering into the dark barns where the tobacco leaves were hung to dry.

During the 1950s we also visited my mother’s friend on a property outside Saint George and watched them “pulling” the mulga. Whether it was for land clearing or for cattle feed, I don’t know. It was impressive, though. Two army tanks, fifty metres or so apart, dragged a heavy chain between them, pulling down the scrub as they went. Perhaps they were bulldozers, but I remember them as tanks. So soon after the War there was probably plenty of army surplus equipment available for jobs like this.

Most of all I remember the noise.

I last visited Mauro in the early 1980s. Con, because we were only going for a couple of days, hadn’t brought proper shoes – just the standard North Queensland driving footwear of the time, rubber thongs. When Don asked him to help shift irrigation pipes, Con wore his thongs. Don was wearing elastic-sided boots.

When Con came back to the house he sat down on the back step and took off his thongs. They had new soles on them: a centimetre-thick matt of prickles; and he sat there glumly pulling them out of the sides of his feet. There are many reasons why westerners wear elastic-sided boots, and prickles, whether bindii, khaki weed or goat’s heads, are high on the list.