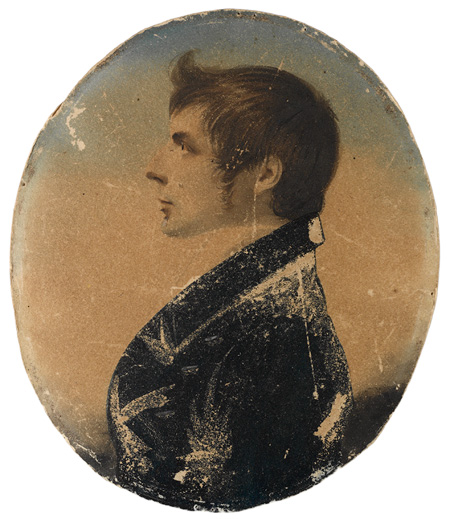 As Surveyor General of New South Wales, which extended to the tip of Cape York, John Oxley sailed north from Sydney in 1823 to find a site for a new penal settlement. It was on this trip that he explored and named the Brisbane River. The local Turrbal people called it Maiwar.

I’ve visited some of the sites where Oxley came ashore.

Where Mount Ommaney Creek flows into the Brisbane River there is a fruit bat colony. The bats shriek and squabble, even in the middle of the day, when they’re supposed to be sleeping. A walking track follows the curves of the hill through bushland above the river. Feral deer live here, and the trees wear knitted jumpers to protect their bark.

John Oxley and his crew rowed upstream in a whaleboat to Mount Ommaney and beyond. By the entrance to the walking track, a plaque has been placed to mark the spot where he came ashore and climbed to the top of the hill to take bearings.

Just fourteen kilometres as the crow flies from the CBD, Mount Ommaney is fifty kilometres by river, and further still from where Oxley had moored his cutter Mermaid, at the southern end of Pumicestone Passage at Bribie Island: “within 150 yards of the shore, in the very place where Captain Flinders had anchored twenty-two years before…”[1]

The following year he was back again, coming up-river with botanist Alan Cunningham and others to find a site for the convict settlement that would be more suitable than Redcliffe, where it had first been established. They camped at Mount Ommaney for the night, probably down by the creek which these days flows through the plush fairways of the McLeod Country Golf Club.

On their way back down river, Oxley and his group landed along the Toowong/Milton Reach looking for a good water source, a necessity for settlement. Coming ashore near the mouth of Western Creek and following it upstream, they found water “in abundance and of excellent quality, being at this season a chain of ponds watering a fine valley.”[2]

Matthew Condon, in his book “Brisbane”, has awakened my interest in Oxley’s chain of ponds, and following his path I go looking for it.[3]

Western Creek, in Oxley’s time a beautiful place, forested and rich in resources, now empties into the river through a concrete drain near the remains of the floating restaurant once known as “Oxley’s on the River”, which was ruined in the 2011 floods. On the river walkway, a display panel describes Oxley and his exploration of the creek; and further along Coronation Drive is a large granite boulder with a plaque that reads,

On 28 September 1824, Lieutenant John Oxley, Surveyor-General of New South Wales, landed hereabouts to obtain fresh water from a nearby stream declaring it to be “by no means an ineligible station for a first settlement up the river”.

I cross under Coronation Avenue beside the concrete drain, which flows out from under the John Oxley Centre office complex. Beyond the building I find it again, before it disappears under the road and the railway bridge to emerge again in Milton Park, then vanish under Frew Park. This was once the home of Milton Tennis Courts.  Now it has shady trees, a playground and barbecues. A nostalgic bronze sculpture of children catching yabbies shows where the creek used to flow.

Across the road, in front of Milton State School, is low-lying Gregory Park, once known as Red Jacket Swamp. The creeks and swamps when Oxley came this way were rich with mud crabs, fish, wild ducks, waterlilies and reeds, used by the large and settled Indigenous population[4].

The creek still flows under these lowlands, and the river seeks it out every flood time. Brown water surges up through the parks and into the shops and homes of Baroona Road and Nash Street, Rosalie, and the television news shows people carrying furniture and possessions through the flood waters to higher ground.

At North Quay, several hundred metres down-river from the mouth of Western Creek, is another stone memorial, dating from the 1920s, claiming to mark the spot where Oxley came ashore looking for water, and, according to the wording of the plaque, “discovered the site of this city.”

To look at the memorial, I walk up from the river path to the busy road leading to the CBD and Riverside Expressway. In 1825 the penal colony was permanently established on this high ground, along what became William Street, down towards the convict-tended food gardens that were to become the City Botanic Gardens.

Soon the local Indigenous population’s hunting and ceremonial grounds would be lost and ruined. The creeks and lagoons would disappear under the developing city.

Now, the massive Queens Wharf development is rising next to 1 William Street, the Queensland Government’s hulking “Tower of Power”, where the old settlement sprawled with its barracks, commandant’s house, cottages and church.

At Redcliffe there’s a handsome monument, above the low red cliffs, commemorating both Oxley and Matthew Flinders; and at Bribie Island, on the shore of Pumicestone Passage, looking out to where both Flinders and Oxley moored their ships, the Bribie Island Seaside Museum gives details of their journeys.

His arduous journeys of exploration damaged John Oxley’s health. He was so ill after the second Brisbane River trip he could hardly walk, and four years later, aged forty-two, he died, in financial hardship, at his property outside Sydney.

Often these “explorers” were motivated by grants of money and land, and Oxley was eager for both; but ever since primary school, when we traced their expeditions on maps of Australia using coloured dots and dashes, I’ve wondered at their fortitude.

As an adult, I’ve also pondered on the disasters that followed for the locals in these lands, whose people had lived in and managed them for millennia.

[1] From the account of J. Uniacke, who came with Oxley’s first expedition to the area, on the Mermaid. Uniacke’s full account is printed in “Discovery of the Brisbane River, 1823 – Oxley, Uniacke and Pamphlet – 175 Years in Retrospect”, Marc Serge Rivière (1998) Royal Historical Society of Queensland, Brisbane. Page 70

[2] Angus Veitch has posted details of Western Creek, John Oxley and the chain of ponds, including quotes from Oxley’s journal, on his interesting 2018 web page,  http://www.oncewasacreek.org/